Written by  Maryam Dolatifard
Published in Articles
Tagged under

Frankfurt School is the intellectual base of philosophers such as Horkheimer, Adorno, Marcuse, and Benjamin. A wide range of Fundamental theoretical viewpoints was raised by the scholars, that influenced the work of the Institute of Social Research, known as “critical theory”, which was largely developed by Horkheimer. Horkheimer and Adorno are two of the leading names associated with the Frankfurt School. Horkheimer wrote "Eclipse Reason" in English. In “Dialectic of Enlightenment” in co-operation with Adorno, he stated that rationality should be criticized in a capitalist world, not class conflict. The Culture industry is the title of the third chapter of the book. When analyzing popular culture, they found that it consists of standardized cultural goods being distributed by mass media (radio, film, press, magazines, etc.).  According to Horkheimer and Adorno, the source of today's disaster is a pattern of blind domination, domination in a triple sense: the domination of nature by human beings, the domination of nature within human beings, and, in both of these forms of domination, the domination of some human beings by others.

Schoenberg, whose “intellectualism is a legend,” is Adorno’s ideal revolutionary. He ranks Schoenberg with Shakespeare and Michelangelo: ” he is a god in the art world”.

We had an opportunity to speak with Dr Meisam Mirian, Researcher, Guitarist, and professor of Music in Art and Architecture Faculty, Shiraz Azad University.

Q: What are the aspects of Adorno’s theory of culture Industry on Iranian Arts?

A: It seems that the aspects of this theory can be seen in the Cinema, Pop Art, Fashion Industry and Music but changes in music have been more significant in recent years. For example, Capitalism has been able to affect the musical taste of people, especially the young generation. In other words pop industry, headed by popular music, which its existence is dependent on the mass culture, more tends to Kitch art and seems alien to the nature of classical or traditional Persian music.

Q: To what extent was Persian Traditional music under the influence of capitalism?

A: A clear answer to this question requires more contemplation. It seems that part of the Persian music culture is trying to keep on the traditional method of musical performance. The European educational system, through Iranian musicians who were educated abroad, affected Persian music in another sense. In other words, Persian music has been transformed in terms of theory, Harmony, notation, orchestration, and performance. These influences are separate issues and not considered as effects of western capitalism on Iranian Art. 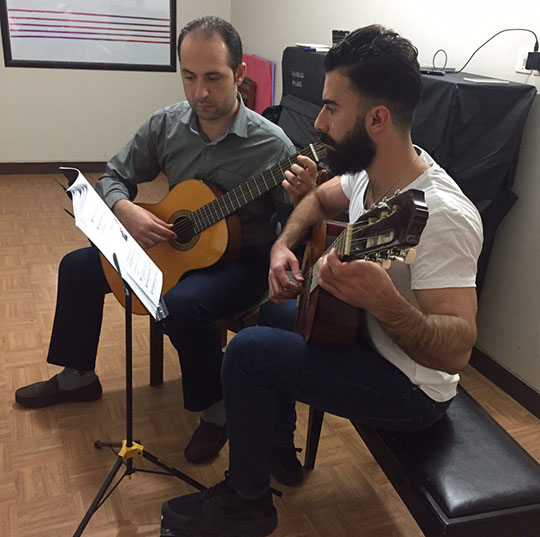 Q: It sounds that European Elitism which influenced the production of music in Europe, could have an impact on Iranian music in a period of time. What is your idea about it?

A: During the history of Iranian music, we have seen the impact of various Ideological factors on music production. Some of the composers are interested in philosophy and it is obvious in their works. For instance, the influence of the Atonal and Serialist music of Schoenberg is felt, in the works of contemporary composers such as Alireza Mashayekhi. It also existed in other works of art of the period, including Cinema.

Q: Please give us brief information about your research field and the Classical guitar instruction, you have translated to Farsi.

A: I translated Aaron shearer’s method of Classical guitar for the first time in Iran. The collection of his instructions includes Harmony, learning classical guitar, the classical guitar technique. He is one of the most widely recognized and respected classic guitar teachers in America. I’m also translating Robert Benedict’s instruction books and preparing an instruction to the beginner students of classical guitar. In my recent researches, it was important for me to study the influences of the world contemporary philosophy on Iranian music. I have also studied the impacts of western music on Iranian music, the basics of Fractalism in Iranian art and music. In particular, I analyzed Theodor Adorno’s culture industry theory on Persian music and it will be published in the near future.

Make sure you enter all the required information, indicated by an asterisk (*). HTML code is not allowed.