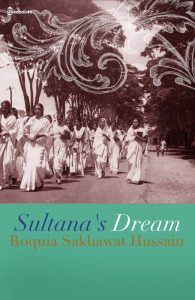 “Sultana’s Dream” was written by Roquia Sakhawat Hussain a social worker and feminist in pre-partition Bangladesh.  The story takes place in a technologically advanced future where women are the dominant sex and men are subservient to them.  The workday is only 2 hours long because “men waste six hours a day smoking” (lol), and female scientists have learned to harness the power of the sun for all of the power needs of society.  This was an interesting element because it injects the idea of green energy into a story that predates climate science.  Essentially everyone is living in a utopia and all due to the fact that women are running society.

I love unearthing examples of early Science Fiction.  Part of it has to do with that quasi-adolescent view of the future from the 19th and 20th centuries, and part of it is the sheer audacity of a person who can visualize a future reality completely disparate from their own.  When you think about it, people rarely look at the possibilities of the future, unprompted. In modern times, technology has begun to move so quickly that the things, so-called crackpots dream of today, often become reality in only a few years.  So in order to keep it fresh, I really sifted through a lot of material to find this one.  Not only was it published in 1905, but it also visualizes a future society.  Whether that society is dystopian or utopian is really in the eye of the beholder.  Some men may read this and take umbrage at the idea that women have achieved the optimal circumstance by sidelining them.  Which is part of the genius of this story.  It isn’t black and white.  It has a level of ambiguity that was absent in most writing of the day, anywhere in the world.

Unusual for the time is a plot that proceeds from a premise in which women are the dominant sex.  What I found of particular interest was the fact that the story was written by a woman in pre-partition Bangladesh.  Not because it was written by a woman or a Muslim woman.  Women of color and Muslim women have an extremely long and established history of scholarship.  I was drawn to this concept that predates any such similar concept in the West (that I know of), and it conveys a point of view that makes one wonder how much was influenced by patriarchal attitudes of the day.

One of the especially malevolent things about colonialism is its tendency to exacerbate the ills of patriarchal systems.  Not only does it add a layer of oppression on top of some that may already exist but within those layers, the additive impact of mutually compounding racism, and misogyny had to be absolutely toxic.  Hussain, a woman born in the 19th century, in a conservative society, decided to write a book about the very dynamics her community was beset by.  She didn’t just right about it.  In her non-literary life, she took it upon herself to correct it.  With a clear understanding that the future of women’s agency lay, to a great degree, in their education, she established a school for girls.  And in order to understand the progress her efforts made, she then created a council that would monitor and report on the state of education among women.  I love this story and her story because all of it goes a long way to dispelling the myths surrounding the supremacy of western culture.  There might have been similar efforts in existence in Europe and the US, but those were established with far fewer barriers.

If you want to see how it ends, you’ll have to download it.  Link below!

This site uses Akismet to reduce spam. Learn how your comment data is processed.